In our previous two entries, we discussed how painters and writers reflected on the passage of time, and we also learned what philosophers and physicists had to say about this issue. Now it’s the time of neurobiology! How does our brain perceive time? What are the neural bases and possible mechanisms underlying time perception? Is there any internal clock or pacemaker? Is timekeeping distributed among different brain areas?

Temporal processing is a daunting task. A rich gamut of behaviors depends on our capacity to calibrate and align incoming signals timely. We sample these inputs at various channels, in distant brain areas, and with different processing speeds. However, our brain does an excellent job in generating a coherent picture of the world around us, updating this report to match the fluctuation of external signals.

From prestissimo to largo

We can compute timing differences that span ten orders of magnitude, from microseconds to a day (Fig. 1). Separate channels deal with this wealth of information. It seems that we have distinct neural systems that process different timescales. On the high-end of this spectrum, we encounter the neurons of the cochlear nuclei that are responsible for sound localization. They achieve an astonishing feat: they can detect time differences of microseconds in the arrival of sound to both ears. Entrained by the light/dark cycle and other signals, the suprachiasmatic nucleus of the hypothalamus is the mammalian master clock that regulates aspects of metabolism and the daily sleep/wakefulness cycle. In between these two extremes of performance, a network of regions associated with the thalamus, cortex, and striatum operate in the range of seconds to minutes, working as coincident detectors (Buhusi & Meck, 2005). Recent research has also implicated the hippocampus in keeping track of how much time elapsed and in discriminating between similar intervals in the scale of minutes (Jacobs et al., 2013). 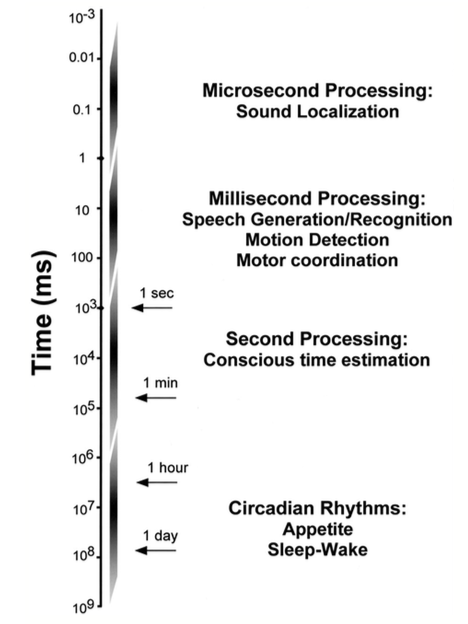 Given the scope of this subject, in this article, we will concentrate on events taking place in tens or hundreds of milliseconds: speech perception, motion processing in the visual and somatosensory systems, and some cues in music perception occur in this time scale.

In “The organization of behavior” (1949), Donald Hebb recognized the importance of time in sculpting network properties when he introduced the groundbreaking concept of concurring excitation as a way of strengthening synaptic connections. The Hebbian synapse model suggested that if a neuron is repeatedly involved in the excitation of another neuron, the connection between them will be more efficient as a result of changes taking place in one or both cells. If two neurons fire together, they wire together. Another plasticity rule appeared later: spike-timing-dependent plasticity (STDP). STDP goes one step further, proposing that the strength of a synapse depends on the relative timing of presynaptic and postsynaptic action potentials (Fig. 2). The spike order can make a dramatic difference, potentiating or depressing the synapse. 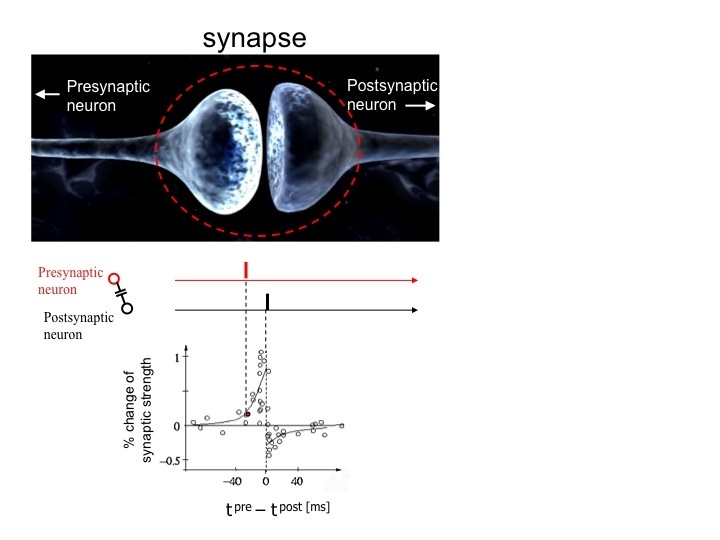 Figure 2. Scheme of spike-timing-dependent plasticity (STDP). In the canonical form of STDP shown here, a presynaptic action potential closely precedes a spike in the postsynapse (red and black bars on top), leading to long-term potentiation (LTP, positive change in synaptic strength). On the contrary, the reversal of this sequence results in long-term depression (LTD, negative change in synaptic strength). In some systems, the temporal requirements for LTP and LTD are exactly the opposite, compared with the canonical STDP. The time window (about 50 ms) can also change depending on the brain region (for details, see Sjöström et al., 2008).

In silico, neural network models incorporating time-dependent realistic features were able to extract temporal information (see Buonomano & Merzenich, 1995). One of them was paired-pulse facilitation (PPF), a known plasticity mechanism in which an impulse evokes a larger postsynaptic potential if another impulse closely preceded it. A dynamic neural profile essentially means that a train of action potentials will change the state of the network, inducing activity-dependent transformations in the circuits. When new inputs arrive later, even if they have the same duration and amplitude, they may still evoke a different pattern of activity simply due to the altered state of the circuit. We will come back later to state-dependent networks and their relevance for time-keeping mechanisms.

In the literature, two models account for the locus of temporal processing in the millisecond time scale. Some authors maintain that an internal clock in our brain sets the pace, pretty much like a computer’s clock. Others think that various regions of the brain share the job of encoding time differences (Eagleman et al., 2005; Buonomano & Karmarkar, 2002). In the latter model, the dynamic state of the networks could per se, encode durations, as seen above (Buonomano & Merzenich, 1995). One of the building blocks of this temporal code might be short-term synaptic plasticity, which could instruct circuits with their recent history of activity, keeping track of what happened on the network a few hundred milliseconds ago.

The centralized and diffuse models can, in turn, be subdivided into two classes: in one of them, the same group of neurons encodes time irrespective of the sensory modality. In the second class, the group of neurons that sets the pace, change depending on the type of sensory input (visual cues, tones, touch stimuli, etc.).

Psychophysics can help us discriminate between these scenarios. This discipline quantitatively addresses the complex relations between incoming physical stimuli and our responses to them. In time perception experiments, the participant is confronted with two stimuli (a tone, for instance) separated by a variable interval of time. Paired-stimuli are randomized, and the subject has to indicate whether the longer segment was the first one or the second one (Fig. 3). 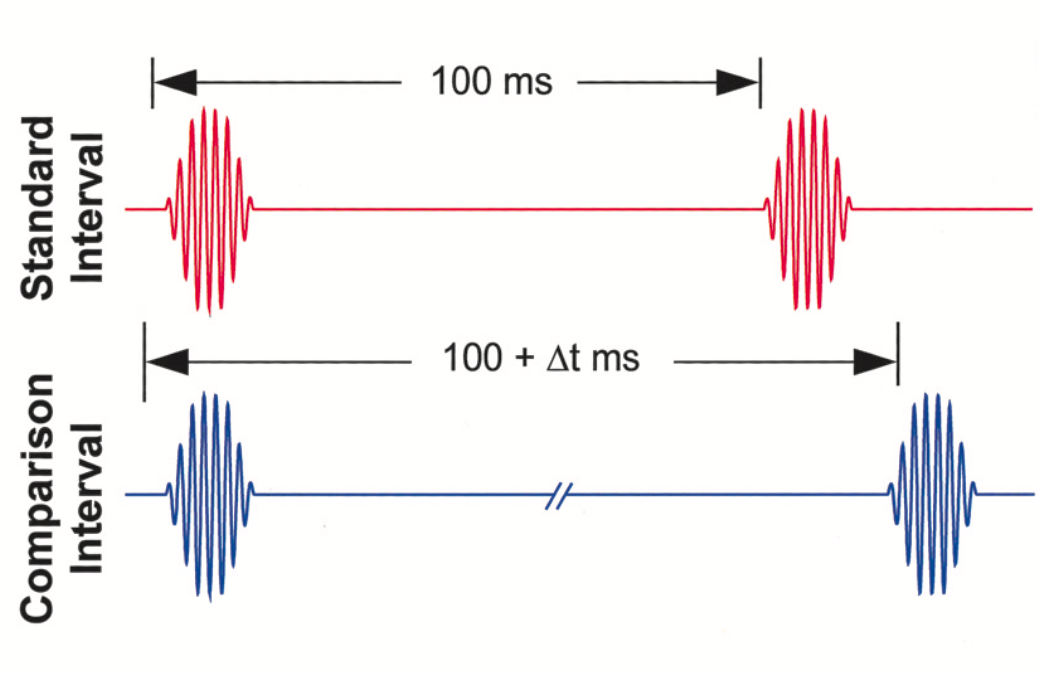 Figure 3.  An experimental paradigm in psychophysics. Two tones flank time intervals of varying duration; the participant is asked to tell which stimulus presentation was longer—taken from Buonomano & Karmarkar, 2002.

If there is a centralized time-sensing area in the brain, individuals that are good at discriminating visual cues might be equally good at discriminating sound stimuli. The psychophysical data so far show that for some tasks, there seems to be a central time-sensing mechanism. This clock is tuned to particular time intervals and can be generalized to different modalities, as long as the tested duration remains the same (Buonomano & Karmarkar, 2002). According to some authors, there could be labeled lines, where groups of neurons would be tuned to specific intervals. If this is true, then it would be possible to selectively abolish timing for some intervals while leaving others untouched, but this idea awaits experimental backup. It is also not clear how these experiments can dissect between a pacemaker and a timekeeper for millisecond durations. For stimuli lasting seconds to minutes, pharmacological manipulations could discriminate between the clock stage and memory storage, based on their sensitivity to dopamine and acetylcholine, respectively (see Buhusi & Meck, 2005).

The neural basis of time perception

The cerebellum works like an internal clock operating in the millisecond range, particularly in motor processing tasks like the eyeblink conditioning. In this protocol, the training of an animal includes paired presentations of a tone and an air-puff delivered to the eye. Trained animals learn to blink their eyes in response to the sound cue alone. Interestingly, they do so after a particular interval of time that matches the gap between tone and puff presentation during training sessions. Lesions in the cerebellum abolish the timing of the response (Buonomano & Karmarkar, 2002).

Our internal register of time can be expanded or compressed depending on factors such as causality and sensory feedback. Haggard and collaborators showed how voluntary actions contract the perceived duration of time between two stimuli, as a mechanism of conscious binding of actions and their effects. Involuntary actions, on the contrary, perceptually expanded the time interval between stimuli, indicating a prominent role of agency in the internal representation of temporal information (Haggard et al., 2002).

As a baseline assessment, subjects had to watch the clock and judge the onset of four different stimuli, which were initially presented all alone. In the voluntary condition, they had to press a key at a time of their choice. In the involuntary condition, trans-cranial magnetic stimulation (TMS) was used to induce a muscle twitch by stimulation of the motor cortex. There was a sham TMS condition, in which they had to indicate the timing of a click produced by TMS, with no muscle twitch following afterward. Finally, in the auditory condition, they had to signal the occurrence of a tone (Fig. 4). 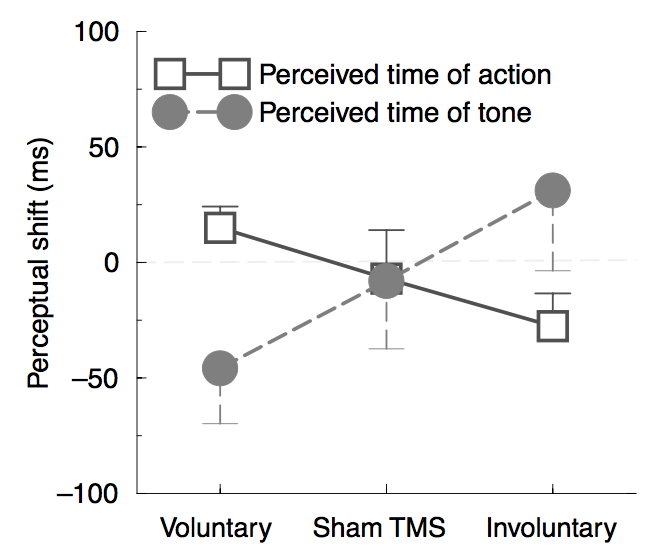 Figure 4. The pattern of perceptual shifts is the evidence of a binding effect mediated by voluntary movement, as opposed to involuntary actions. Negative perceptual changes (in ms) indicate that an event is perceived earlier in an operant environment compared to its presentation alone in the baseline condition. Binding of the first event toward the subsequent tone is shown as an anticipatory perception of the tone and delayed perception of the key’s press. Taken from Haggard et al., 2002.

In the operant condition, voluntary action, sham TMS, and the TMS click were followed 250 ms later by the sound. Interestingly, perceptual shifts between single event presentations (baseline test) and their operant context, indicated a strong attraction for voluntary actions and the tone. The involuntary action (muscle twitch triggered by TMS stimulation, without the intention of the subject) and its subsequent sound showed the opposite behavior. In other words, conscious, intentional aspects of motor control perceptually anticipated the perceived occurrence of the tone and delayed the action of pressing the key.