In our previous article, we introduced the Paragone, also known as the parallel between the arts, by comparing painting and sculpture in the Renaissance. This essay will illuminate the rich critical tradition that explored the relationship between literature and the visual arts and revisit some of their Renaissance referents.

Through the Paragone controversy, intellectuals sought to establish common links between the various arts and crafts by focusing on their specific means and purposes. In doing so, thinkers would often refer to the precept ut pictura poesis (“as is painting, so is poetry”), first coined by Horatio to exemplify the similarities between poetry and painting but later used in academic circles to explore the existence of equivalent connections between the other arts. This claim suggested that in all their uniqueness, all arts were still closely related by their shared emphasis on the expression of human passions and the representation of higher moral attitudes. In those days, building hierarchies between the arts was a rhetorical exercise that consisted of assessing their shared traits and distinct qualities, often relying on Platonic and Aristotelian interpretations of the concept of imitation of nature (mimesis). This concept, which governed the critical evaluation of art for generations, was anchored in the notion that nature was a template for truth, purity, and beauty and, therefore a guiding principle in the world’s artistic representation.

Plato confronted the mere imitation of nature as a spurious tautology. For him, it was an unnecessary duplication of the model, itself a vague reflection of the true Being -the Idea- of which that very model was just a corrupt materialisation. Aristotle introduced a distinction between the imitated object (what is being depicted) and its representation. We will shortly see how Renaissance intellectuals navigated between these positions, giving rise to the earliest form of art criticism.

The Latin word liberalis alluded to the condition of a freeman as opposed to a slave. For the Romans, freemen enjoyed political and civil liberties and did not need to work to earn their living. Citizens could, therefore, cultivate the intellect to gain knowledge of the world. Thus, in Classical Antiquity, people believed that the artes liberales were the essential disciplines that freemen could rely upon to reflect on the challenges of their time. In the Middle Ages and the Renaissance, these subjects would become part of the secular educational programme taught at universities. The liberal arts traditionally comprised grammar, logic and rhetoric-grouped together within the lower division or Trivium– and arithmetic, music, geometry and astronomy, which belonged in the upper division, or Quadrivium.

As perplexing as it may seem today, painting and sculpture were not part of the seven liberal arts. Literature was not part of the abovementioned canon, but it was much closer to the liberal arts than painting or sculpture because of its close ties with grammar and rhetoric. Painting and sculpture, however, were regarded as physical labour. As a result of this hierarchy, they were relegated to the lower echelons with all other crafts. To elbow their way through this crowded rank, painters and sculptors needed to acquire a new self-awareness of their strengths.

According to Harbison[1], it would seem that Northern artists, who usually approached visual representation from a practical angle rather than a theoretical one, were initially more successful in cultivating this self-assured persona than their Southern colleagues. German carvers, for instance, would customarily include their self-portraits in the finished product. In Nuremberg, Adam Kraft, in the second half of the XVth century, chiselled a life-size image of himself as a proud, tool-wielding atlas. Amongst the painters, Albrecht Dürer was notorious for having a lifelong fascination with his appearance. His self-portrait of 1500, now at Munich’s Alte Pinakothek, is perhaps one of the most striking examples. Unlike the customary three-quarters view, the artist is depicted squarely toward the viewer in a strongly reminiscent composition of blessing Christ. A painter posing as Salvator Mundi? Let’s now have a look at how poets faired in this comparison. 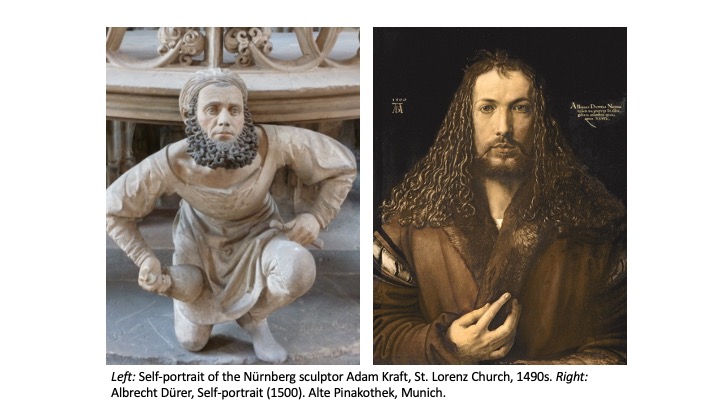 The Florentine Humanist Benedetto Varchi, a distinguished member of the Accademia Fiorentina, was a respected scholar interested in linguistics, literary criticism, aesthetics, and philosophy. In 1547 he published his influential work Lezione seconda della maggioranza dell’arti e qual sia piu nobile, la scultura o la pittura. Built upon a solid Aristotelian framework, Varchi believed that poetry and painting subserve the same objective: to imitate nature. Moreover, they would do so to such an extent that they may be regarded as equal. However, he clarified:

According to this dualistic view, poetry and painting would thus be complementary since the former’s purpose is to depict the inscrutable turmoil that besieges the human soul, leaving to the latter the rendition of our physical carcass. Interestingly, through this precise division of tasks, poetry acquired a new and more dignified status. Suppose poetry’s raison d’être is to convey “the inside” (il di dentro), e.g. the obscure motor of external actions. In that case, the concept of imitation must necessarily exceed the mere copying of the visible and be able to “stage” what remains eminently inaccessible to us. According to Sgarbi[3], Varchi widens the concept of representation: something invisible to the eye- the inside as the subject of poetry- can now gain a new tangible skin. Thus, Varchi was inadvertently sanctioning the equality between imitation and representation, later consecrated by other scholars after him. As Sgarbi hastens to underline, this subtle semantic transition was crucial as “imitation” no longer meant mere “reproduction” or “copy”. Poets were now allowed to introduce an inventive element, unprecedented up to that time. Although poets and painters can occasionally switch tasks, Varchi sees no added value in this exchange:

Whereas poets emerged reinvigorated out of this rhetorical joust, painters were still reduced to depicting the physical world. It will be up to Ludovico Dolce to reinstate them by taking the “ut poesis pictura” motto to the extreme in his Dialogo della pittura intitolato l’Aretino, published in Venice in 1557.

In L’ Aretino, Dolce stages a dialogue between Pietro Aretino, for whom Tiziano epitomised Venetian’s superiority over Tuscan painting, and Francesco Fabrini, a cultivated Florentine who defended the artistic preeminence of his city, embodied in Michelangelo. As we discussed in a previous article, Aretino was one of the proponents of assessing any art’s excellence based on the ease or lack of effort with which that art achieves its goals. Ease, however, should be understood as making it seem easy what in reality is complicated. In other words, the prowess of an artist consisted of hiding the technique and disguising the artifice to render an illusion plausible. Dolce puts in the mouth of Aretino his arguments on the similarities and differences between painting and poetry:

Aretino: I will only say that painting, briefly speaking, is nothing other than the imitation of nature; […]. But because this definition is somewhat restricted and incomplete, it does not distinguish the painter from the poet, and the poet also strives to imitate it. I would add that the painter is intent on imitating through the lines and colours, whether, on a plane of wood, wall or canvas, everything that is shown to the eye; and the poet through the words is imitating not only what is shown to the eye, but also what is represented to the intellect. Albeit different in this respect, they are so similar in many ways that they can almost be called sisters.

Aretino: They may well say that, while the painter cannot paint the things that are subject to touch, such as the coldness of snow, or the taste, such as the sweetness of honey; he does not paint the thoughts and affections of the soul either. […] But the eyes are above all the windows of the soul, and in them, the painter can comfortably express all passions: joys, pain, anger, fears, hope and desires. […][5]

Like Varchi, Dolce concedes that poetry and painting are sister arts because they both strive to imitate nature, albeit relying on their specific resources. However, he seems to go beyond Varchi’s somewhat restrictive assessment of vision. In Dolce’s expanded visual field, we now encounter “joys, pain, anger, fear, hope and desires…”. The retina is no longer a mirror of the world but a new canvas that can also portray inner life. The relationship is reciprocal: poetry, too, can therefore communicate through eye-mediated phenomena. The human eye -regarded here as the “window of the soul”- becomes a communicating vessel that cuts across both arts. However, we should bear in mind that if the sense of sight is to convey information about phenomena of the inner human life in any meaningful way, then external gestures must be unambiguous. Thoughts and sensations need to be precisely coded and accurately mapped onto gestures and facial expressions to avoid misunderstandings. We will later return to the strict visual charting of human emotions when discussing René Descartes’ Traité des passions (1649) and Charles Lebrun’s famous conference at the Académie Royale de peinture et de sculpture in 1668.

In his critical analysis of Painting, Dolce identifies three components: invenzione, disegno, and colorito, corresponding to the Aristotelian concepts inventio, dispositio, and elocutio, respectively[6]. The invenzione – the painter’s story as the subject of representation- calls for the appropriate realisation of a given theme. Disegno exceeds the concrete execution of the outline drawing in the picture; it encompasses the Idea formed in the painter’s mind, e.g. the conceptual layout with which the painter represents the story. Finally, colorito is the painterly equivalent of the rhetorical elocutio and determines the vividness of what is represented. For Dolce, the ultimate purpose of colour is to bring images to life and make them as close to reality as possible. A careful balance of these elements would ensure that the artist brings about a compelling visual experience that realises the work’s predefined scope and purpose. But he goes even further: painters should not be contempt with imitating nature but must even surpass it. To illustrate this mandate, he brought up the story of Zeuxis, the painter who had been commissioned with portraying Helena of Croton, renowned for her unrivalled beauty. Although Zeuxis tried hard, he could not find a model that would match Helena, so he chose the five most beautiful girls of the place and grafted their most attractive body parts into a composite, ideal image of female beauty. In doing so, Zeuxis achieved no small feat: whilst essentially remaining committed to nature, he still managed to distil the ideal from the accidental.