Share On GoogleShare On FacebookShare On Twitter
Home » Vision » Seeing the movement: our visual brain at work

Having discussed how painters tackled the problem of representing motion in art, we can, therefore, ask ourselves the following question: how is this type of information processed in our brain? On a different occasion, we will describe the stream of visual information from the retina via the lateral geniculate nucleus (LGN) to the posterior pole of the occipital lobe, which contains the primary visual cortex (V1).

From V1, information flows along two channels: a ventral pathway extending towards the temporal lobe and a more dorsal pathway, that projects towards the parietal lobe (see figure below). The ventral stream of information is mainly concerned with establishing identities and building categories of visual objects. Running in an anterior direction from the occipital lobe, neurons lying along this pathway are selectively activated by increasingly more complex visual stimuli. Disruption of this network leads to a deficit in object recognition, called agnosia. 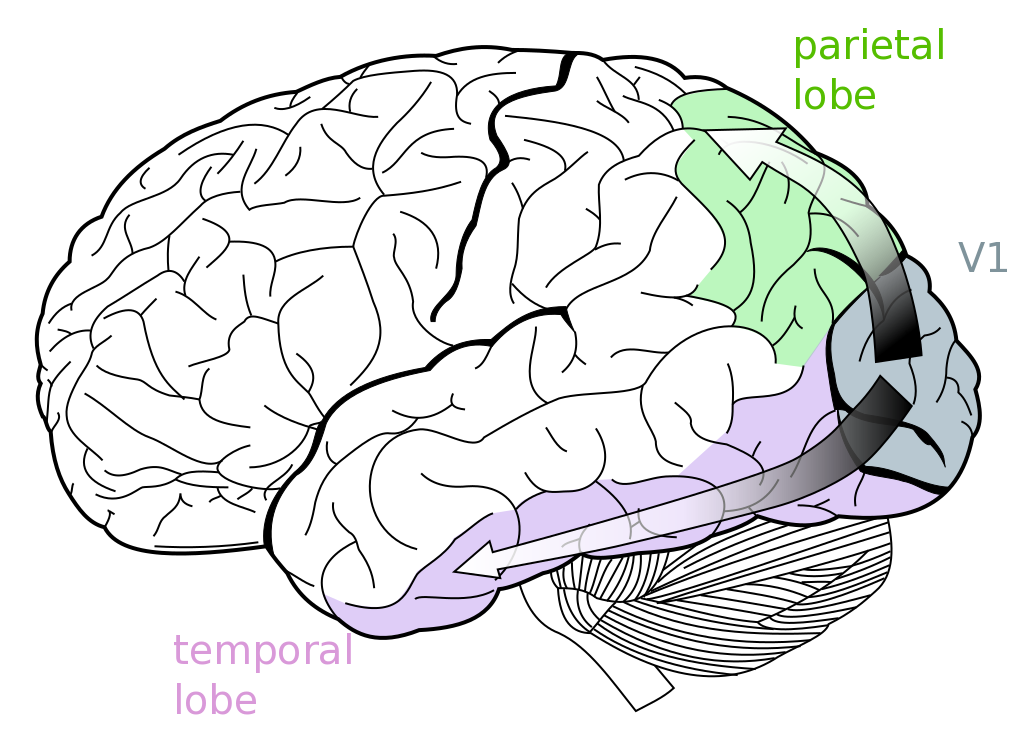 Neurons with complex response profiles in the inferotemporal lobe are capable of responding not only to different pictures of a person (celebrities like Scarlett Johansson and unfortunately, your mother in law as well) but also to that person’s written or spoken name. This feature suggests an ability to encode concepts beyond the boundaries of sensory modalities. But this will be the subject of another entry in the blog.

Here we will focus on the dorsal pathway, which contains the middle temporal region (MT) also called V5. The discovery of this area is a beautiful story in itself. One century ago, WW1 was ravaging Europe, and severely injured military personnel flooded hospitals like the Empire Hospital for Officers, where the first character of our story was working as a promising neurologist. In 1917 George Riddoch performed a series of visual tests on soldiers that suffered from shell shock wounds affecting the occipital pole. Below I show the visual fields of Lieut. Col. T. 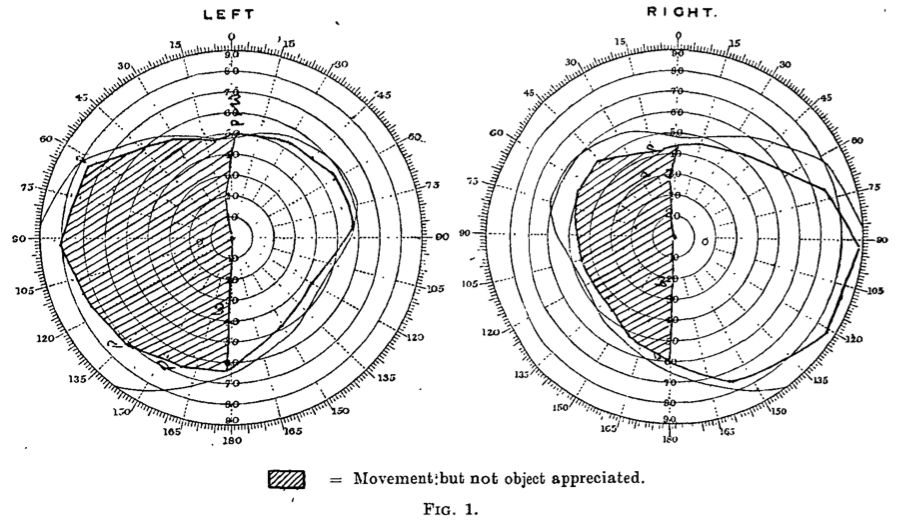 His right occipital pole was damaged, resulting in left hemianopsia (blindness of a half-field of view). Interestingly, he would perceive moving objects lying on his left-field but not stationary ones. He would typically miss pieces of meat on the left side of his plate, but he could detect moving objects on that side, although he reported blurry shapes and greyish colours. Riddoch quickly realised that there was a complete dissociation of both visual attributes: objects presented in the blind hemifield were invisible when kept stationary but were soon detectable when they moved. These results suggested the existence of separate pathways dealing with static and kinetic visual information.

V5 & The rise of the modular visual brain

Another piece of the puzzle was added in 1969 when Semir Zeki identified a prominent tract of thick fibres connecting V1 with a clear zone in the temporal lobe, a region he called V5. Were the neurons in this area responsible for detecting motion? In 1974, Zeki recorded in monkeys the electrical activity of these neurons in response to presentations of visual stimuli on a screen. Below I show a representative experiment. 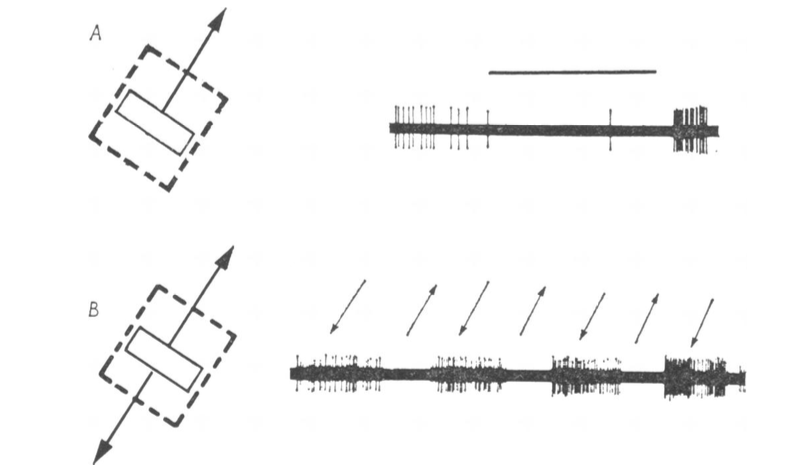 The visual stimulus is on the left, which in this case was a bar that moved in two directions, as indicated by the arrows. The dashed line square shows the borders of the receptive field for that particular neuron. The receptive field of a visual neuron is the area of the visual field in which a presentation of a visual stimulus evokes an electrical response from that neuron. The right panel shows the action potentials (stereotyped all or none electrical signals) fired by the neuron as a readout of its electrical activity during the processing of visual information. All cells within V5 were motion-sensitive, and interestingly, a subset of them was directionally selective.

This discovery served as the basis for a modular theory of how the visual brain works in primates, arguing that functionally specialised regions handle specific attributes of a visual scene. Several lines of evidence indicate that colour, shape, and motion are processed in parallel by separate areas of our brain, populated by neurons that are selectively excited by those features and following a ¨division of the labour¨ scheme. However, since we usually have a unique and integrated perceptual impression of the world that surrounds us, how does the brain succeed in merging back the scattered information bits to yield a coherent view? We do not have a definitive answer to that yet, but we will sketch it in a different article on this blog.

Another interesting question is the following: what is the relation between perceptual judgment and the electrical activity of neurons? When sitting a behavioural test in which we are asked to discriminate between two visual stimuli by their features, is the activity of one or a few neurons driving the perceptual decision? Is this decision based on any complex function of the firing rate of one or a few neurons? Or is it instead a pooled signal coming from a larger circuit, what counts here?

In 1989, Bill Newsome addressed this question by doing an elegant experiment. Monkeys were trained to report the direction of motion of a random-dot display (basically a cloud of points moving stochastically in all directions of the screen), in which some dots moved coherently, and others did it haphazardly. They changed the strength of the signal by varying the percentage of coherent dots: the higher the percentage of coherence, the more obvious was the general direction of the movement emerging from the pattern of dots. At the same time, they recorded the activity of single neurons in area MT (V5). For any given neuron, they placed the dots cloud in the receptive field and adjusted the motion direction to match the neuron’s preference.

They alternated tests in which they presented the optimal stimulus and a ¨null¨ one (a 180°-rotated version of the best stimulus, which evokes no response from that neuron). At the end of each trial, the monkey had to report whether the stimulus corresponded to the ¨null¨ or preferred direction. The authors computed a psychometric function from the animal’s behavioural responses and a neurometric function that characterised the neuron’s sensitivity to the motion’s signal. The results are shown below for the neuron’s electrical activity (full black circles) and the psychophysical values (white circles), recorded simultaneously for each trial.

First, we observe that already at 12% of coherence (meaning that 12% of points move in one direction, 88% are stochastic) both curves saturate: the monkey gets it right 100% of the time. On the Y-axis, the curves start at a correctness value of 0.5 because the performance would be 50% correct by chance.

The result is surprising: both curves are similar, but the neuronal data lies to the left of the behavioural data, meaning that the neurons were somewhat more sensitive than the monkey. In other words, had the monkey strictly used MT neurons as predictors to guide his choice, he would have probably outperformed himself. These results show that we can construct quite an accurate description of the monkey’s performance from the signals of a small number of neurons whose selectivities match the demands of the perceptual task.

And now, to finish this article we go back to Riddoch because we still need to complete the puzzle! As I said before, his patients reported the perception of movement in the blind field of view. Loss of V1 due to gunshot wounds affecting the occipital pole has a devastating effect on eyesight, because it cuts off retinal inputs (sent to V1 via the lateral geniculate nucleus), to cortical visual areas that process particular features of a stimulus, like V5 (MT).

But then, if they were blind, how could they possibly detect movement? In 2004, Sincich and coworkers provided a possible explanation. Using retrograde tracers, they revealed the existence of a direct anatomical connection between the lateral geniculate nucleus (LGN), which receives input from the retina, and motion-sensitive area MT. The funny part is that this tract bypasses V1, and therefore Riddoch’s patients might have still preserved some residual perception-notably for moving stimuli- despite having suffered substantial damages to V1.

This example illustrates the modular organisation of the visual brain, with functionally specialised areas that treat specific attributes of a visual scene. When one of them does not do the job, our brain puts together the pieces, but the puzzle remains incomplete.

Functional organization of a visual area in the posterior bank of the superior temporal sulcus of the rhesus monkey. Zeki S. The Journal of Physiology, 236, pp. 549-573 (1974).