Steven Pinker once prophesied that there would never be a “Decade of the pancreas”. As the silent witness of bile’s passage, one of the four humours in medieval times, its heyday had probably passed long ago. By then, a new patronage was furtively on the way. When the US Congress launched the “Decade of the Brain” initiative, neuroscience stormed the marquees and stole the show in the 1990s. Why was brain research on the spotlight? Fast-paced research combined with an increasing awareness of how devastating and costly brain diseases are for our society.  As the organ of emotion, perception, and memory, the brain’s impairment has immediate and palpable consequences on our life quality.

Two decades later, the expansion of neurobiology is sending unexpected ripples into dietary recommendations and self-help books. Neuro-centric explanations might come handy when we want to disengage ourselves from our leading roles in daily miseries, providing us with scalable alibis sur mesure. A rare confluence of scientists’ inability to communicate their research compellingly, a health-obsessed society that uncomfortably dwells in doubt, lay auto-exclusion from the scientific debate and relics of magical thinking, all contribute to a new type of knowledge with diffuse borders.

In her project Brainlines, artist Julia Buntaine documented the surge of neuroscientific information in the press. She tracked the number of times the word “brain” appeared in the headlines of The New York Times starting in 1951 (Fig. 1). 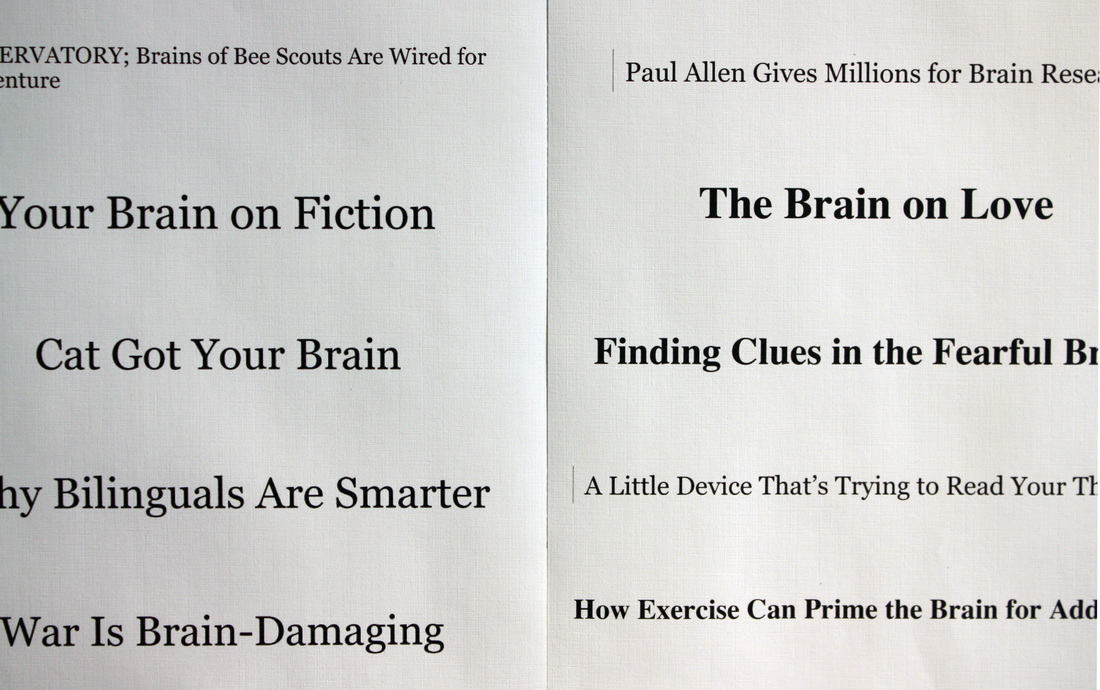 She found that since about the year 2000, the newspaper has amplified its coverage to a volume of 30 to 80 articles a year. Although information bloating probably affected other domains as well, this number may not only be a coarse proxy for the growing amount of research published in this field (see Fig. 2) but also of its increasing gravitation in human matters as perceived by the society. 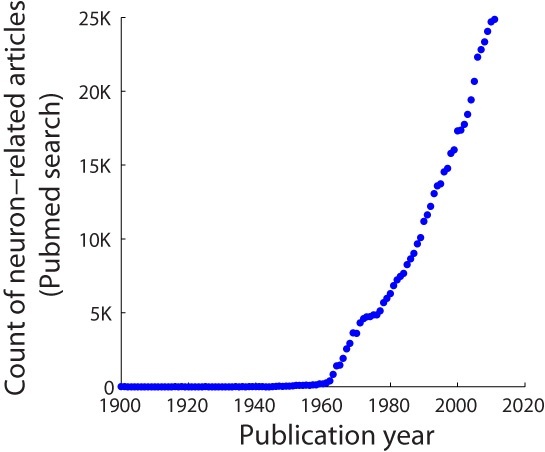 Fig. 2. The number of scientific articles in Pubmed containing the word “neuron” in their titles or abstracts (updated in 2011). Source: www.pubmed.gov

But how much of this coverage by the media is accurate and how is brain research perceived socially? The social representation theory can provide a framework to investigate how scholarly knowledge can infiltrate lay undercurrents, loading itself with new sediments as a result of this exchange.

O’Connor and Joffe recently interviewed 48 London residents with no prior involvement with biomedical sciences and proposed them a free-association task. The subsequent verbal interview took on from that initial task and sought to stimulate participants to elaborate on their drawings via general prompt questions. 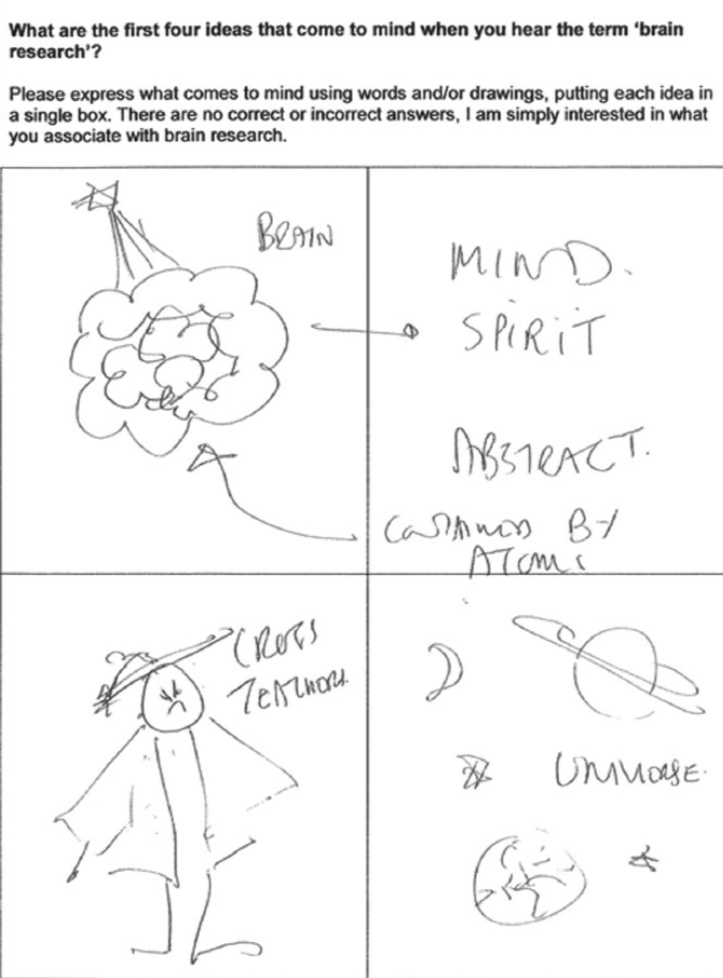 The sample was age and gender-balanced and socioeconomically diverse. The results show that brain research, although considered a domain of science, is absent in day-to-day thoughts and conversations. It only pops up on the daily agenda when things go wrong: neurological problems leading to emotional instability, loss of relationships and independence can make the brain’s threads again visible.

« Science of the brain? I haven’t a clue. Nothing at all. I’d be lying if I said there was. You know, I’ve been a bus driver for many years, I was a salesman for many many years and I don’t know, it’s, it’s, I mean I’ve never, ever, ever given it a thought ».(Male, tabloid reader, 38-57 age-group)

According to this study, scientists were generally judged as credible. The visual representation of neuroscientists conformed to the pictorial canon: an invariably white prêt-à-porter dress code made for an army of bespectacled men. Interviewees often associated neuroscience with dogs and monkeys having implanted brain electrodes and 60% of them conflated it with brain surgery. An apparent social gulf divided respondents from scientists, the latter ones seen as belonging to an elite, an impermeable social milieu that precluded lay participation. In several cases, this prompted feelings of alienation of the us-them type and the recognition that only academics or “scientific people” can engage with these topics. Encounters with the scientific material were demoralizing and further cemented this feeling of alienation (“Where do these people come from, that actually understand these things?”) This distance also fuelled certain distrust for scientists: 31% suspected that scientists serve hidden agendas dominated by obscure political and financial interests.

Add a tad of neuro-sauce to your articles!

We generally have trouble at scrutinizing the logical validity of statements. We rather judge them intuitively, failing to detect circular arguments and often confounding lengthy explanations with expert opinions. Typical vices also include forcing a teleological corset on explanations (the misuse of natural selection is a good example of this) and adding substantial layers of ad-hoc hypotheses to rescue stumbling theories (a typical procedure in conspiracy theories, for instance).

The expert group also rated good explanations as significantly more satisfying than bad ones, but unlike the other two groups, subjects scored explanations in the same way irrespective of whether they contained neuroscience information or not.

Mind, soul and the myth of the 10% brain usage

Suzana Herculano-Houzel decided to investigate what Brazilians know about the brain and the results were far more optimistic than what we would expect. She prepared a survey containing 95 multiple-choice statements which admitted only “yes”, “no” or “I don’t know” as answers. Different areas of neuroscience were represented and special care was put to avoid technical words like “synapse” or “cortex”. Typical assertions were: “We use our brain 24 hours a day”, “The bigger the brain, the more intelligent the animal” or “ Learning is due to modifications in the brain”. The survey was targeted at students and teachers of private and public schools, college students, and professors, subscribers of popular science magazines and professionals of various fields of interest. As an internal control, the same questionnaire translated into English was circulated among 270 members of the Society for Neuroscience and 35 senior neuroscientists worldwide.

An analysis of 2158 completed questionnaires revealed that the general public scored an average of 48.4% ± 13.9 % correct answers against an average score of 87.1% ± 6.7% obtained by neuroscientists. Schooling was the factor that improved neuro-scientific culture the most (30% increase from high school to graduate respondents), followed by the reading of popular science magazines (16.3%) and newspapers (8.9%). The major differences in the way laypeople and neuroscientists saw the brain included learning, memory, the brain-computer analogy and the intervention of an immaterial soul in producing the mind. But they both converged on important notions such as the functional organization of the brain in different areas, lack of correlation between brain size and intelligence and the effect of drugs on the brain.

All in all, it seems that we still have a long way ahead of us to bridge the gap between scientists and the general public. Maybe the best description of the self-auscultating brain was given by Ambrose Bierce in “The Devil’s Dictionary”:

“MIND, n. A mysterious form of matter secreted by the brain. Its chief activity consists in the endeavour to ascertain its own nature, the futility of which attempt being due to the fact that it has nothing but itself to know itself with”

¨Celebrating a decade of progress¨, Nature Neuroscience Editorial, Vol.2 No.6, 1999.

Herculano-Houzel S, “Do you know your brain? A survey on public neuroscience literacy at the closing of the decade of the brain”, Neuroscientist, 8(2):98-110, 2002.