Share On GoogleShare On FacebookShare On Twitter
Home » Vision » Light music for the masses: a story of LEDs

With optics coming of age and its widespread use in biomedical sciences, scientists invest substantial efforts in new imaging technologies. The aim is to reconcile versatility, performance and cost issues. Developments take place in the design of new molecules with expanded capabilities (e.g., increased resistance to photodamage, exquisite sensitivity to excitation frequency, chemical stability). But they also pursue the engineering of more flexible sensors and stimulators with improved performance (e.g. higher quantum efficiency detectors, higher signal-to-noise ratios and the choice of selectable wavelengths of excitation with narrower bandwidths).

Being able to quickly switch across different stimulation wavelengths while keeping them as narrow as possible is of great value for the experimenter. The optical properties of most materials largely depend on the wavelength that is used to study them. Working with “pure” light, as monochromatic as possible, is, therefore, a highly coveted aspiration that guides current efforts in optics.

The most popular type of optical setup in cellular neurobiology consists of a light source (usually a xenon lamp) coupled to a monochromator. This device allows selecting a particular wavelength from the many available at the input. The output of the monochromator is coupled to the microscope and can, therefore, excite the biological sample lying under its objective. Although this design has been widely successful, to achieve a multi-band output and faster changes, some optical elements need to be brought on board, having an impact on the overall price. In a recent paper published in Nature Scientific Reports, Belušič and co-workers (1) found an elegant and inexpensive solution to circumvent this drawback and obtain multi-band stimulation at an extremely attractive price tag of 700€!

The LED synthesiser & how it works

The light source of this multi-spectral synthesiser, as they call it, is comprised of 20 LEDs of different colours, which are aligned in a row and forming an intrinsic multi-band light stimulator. The light coming from these LEDs is focused on a planar reflective diffraction grating. A grating is a flat optical component containing ridges at precise intervals along its surface. According to the principle of diffraction established by Fresnel and Huygens, light hitting such a periodic structure is decomposed into several beams travelling in different directions. The wavelength of each light source and the spacing of the ridges on the grating set these trajectories. Diffraction of longer wavelengths (red) will be larger than shorter ones (violet). Therefore, using the grating, one can combine beams of different wavelengths. 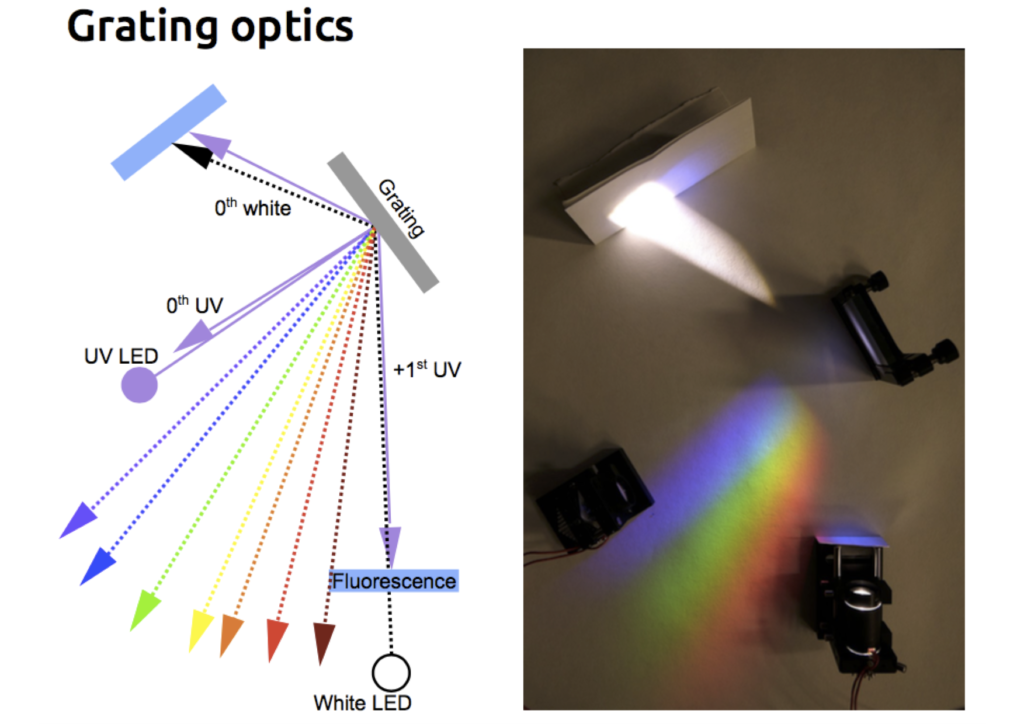 The LED synthesiser in action!

The resulting composite beam then travels through a light guide equipped with a single aspheric lens. This lens minifies the diffracted “rainbow-type” pattern of colours produced by the grating and brings it into focus at its centre. The combination of grating and light-guide fibre also had an unexpectedly beneficial consequence. The emerging light had significantly narrower spectral bands; the planar refractive grating not only combines several wavelengths into a single output beam but also cleans their spectra, narrowing their bandwidth.

What can we do with LEDs?

How about testing this gadget in a biological preparation? Sticking sharp electrodes into photoreceptor cells from the blowfly’s eye, the authors measured changes in the membrane voltage evoked by short pulses of monochromatic light. Stimuli were applied with the LED synthesiser or with a classic photo stimulator. To map the photoreceptor’s response to light of different colours, they swept across a series of wavelengths, from 355 nm (ultraviolet) to 625 nm (red light) and were able to obtain a full spectral sensitivity curve in less than 2 seconds. These curves, constructed from the electrical responses to each wavelength presentation, were the same for both stimulation strategies.

As a proof of concept of its potential in biomedical imaging, they moved on to determine the absorption spectrum of oxyhemoglobin and deoxyhemoglobin species in a blood lysate. They presented a series of monochromatic light pulses spanning from 393 nm to 625 nm using either the LED synthesiser or a conventional spectrophotometer. A comparison of experimental results with tabulated data from the literature revealed that for measurements above 440 nm, both absorbance curves were nicely matching, indicating a similar performance for both optical devices.

Next, they set out to establish whether the LED synthesiser could also discern between oxygenated and deoxygenated haemoglobin in living tissue. To answer this question, the scientists imaged blood vessels of the frog’s abdominal skin. The advantage of this preparation is that oxyhemoglobin is enriched in the veins, whereas arteries contain its deoxygenated counterpart. The results were promising: they could identify spectral components containing enough optical information to discriminate between arteries and veins in the visual field, purely based on their absorption values.

Applications of the LED synthesiser

The LED synthesiser, therefore, represents a robust imaging device offering fast switchable control of the wavelength’s output and equalling to a large extent the performance of a monochromator-based setup, but at a considerably lower price. It can be assembled using inexpensive off-the-shelf equipment, namely cheaply available LEDs, a light guide, an aspheric lens and a planar reflective grating. The amount of undesired light (stray light) in the optical system is significantly reduced. LEDs also have a long operational life, stable output and one can easily manipulate them and replace them if necessary, unlike the more cumbersome xenon lamps. If used in combination with an ophthalmoscope, this imaging device could be helpful in various clinical settings like vision physiology (fundus examination, for instance). Likewise, it could be introduced in sophisticated biomedical applications like optogenetics and fluorescence microscopy.

Photodamage: Fluorescent molecules do not last forever. Upon repeated excitation, they undergo irreversible chemical changes after which they are no longer fluorescent. Photobleaching, as this process is also known, depends on the illumination level. Photobleaching is used in an optical imaging strategy called FRAP (fluorescence recovery after photobleaching), which is used to track the mobility of fluorescently labelled cellular proteins of interest. Using this technique, one can selectively wipe out the fluorescence within a cell region. Next, as non-bleached labelled proteins in the vicinity gradually start to repopulate the bleached area, one can monitor its recovery.

Quantum efficiency of a detector: the per cent of incident photons that generate a signal. Not to be mixed with the quantum yield of a fluorescent molecule, which is a measure of its fluorescence efficiency, given by the fraction of all excited molecules that relax by fluorescence emission.

LED: Light-emitting diodes. Resistors, capacitors, and inductors are linear circuit elements, meaning that a doubling of an applied signal (for instance, voltage) will lead to a doubling of the response (current). Diodes, on the contrary, are non-linear and let current flow in one direction, behaving as rectifiers. LEDs contain a semiconductor crystal coated with impurities that generate two regions: a negative n-region (charged with electrons), and a p-region (with positive charge carriers). If sufficient voltage is applied, electrons flow across the junction between both regions, releasing energy in the form of photons.