Share On GoogleShare On FacebookShare On Twitter
Home » Motor system » Do the locomotion! A brain-machine interface to restore gait

The teamwork behind the motor activity

We are endowed with a rich palette of motor programs that rely on our ability to timely coordinate the recruitment of different muscle groups. This gift runs the whole gamut, from the large muscles used in rowing up to the smaller inner larynx muscles that control the closure of vocal cords. As we all quickly learned through jogging, movement means work, and work means energy. Just imagine the sheer metabolic rate of wings’ muscles in flying insects, when they beat their wings at 500 Hz!

Although orchestrating such a complex pattern of muscle activation is a daunting task, a few organizational principles have emerged during evolution to cope with these demands. Firstly, as in sensory systems, there is a hierarchical control of muscle output, with increasingly more complex tasks being performed by groups of neurons that are higher up in the chain of command. Secondly, sensory and motor systems operate coordinately through positive and negative feedback loops that control sensory-motor transformations. And thirdly, all this is happening in the gravitational field of the Earth, which means that before we even move one finger, contractions have to kick-in to counter the effects of gravity and adapt the body posture accordingly.

In addition to feedback loops, sensory inputs and descending commands from the cortex control motoneurons in the spinal cord. These neurons represent the executive branch of the motor system; their cell bodies are located in the ventral side of the spinal cord, and their long axons innervate skeletal muscle fibers. Even simple movements require an ambitious sequence of preparatory steps. For instance, if we want to grab a glass of wine on the table, we need first to visualize it and then compute a successful trajectory to reach our target. Antagonist and agonist muscles must be synergized with exquisite timing and with the right amount of applied force. The integration of sensorimotor information areas of out in the motor cortex, with the additional participation of other cortical areas.

Locomotion provides compelling evidence of the importance of circuits that control coordinated movements. Experiments done in cats with lesions in the brainstem revealed that the elementary circuits controlling gait, like respiratory centers, retain a certain degree of automatism and independence from sensory information. Since the beginning of the 20th century, we’ve known that circuits in the spinal cord can still give rise to patterned motor activity in the absence of brain inputs. When axons of sensory and motor neurons are severed in the peripheral nervous system (PNS), they can regenerate and reinnervate their targets. However, when the damage takes place in the spinal cord, and therefore within the central nervous system (CNS), axonal regrowth invariably stops at glial scars formed at lesion sites. Damage to the motor system can, therefore, be tremendously incapacitating, curtailing our ability to move autonomously.

In a recent paper published in Nature (1), the lab of Grégoire Courtine developed an approach that integrates wireless communication in real-time between the motor cortex and the spinal cord, bypassing the lesion site. The idea stems from the premise that the motor cortex, spared by the damage occurring further downstream in the motor system, preserves the information necessary to instruct muscles to move. This code is embodied in the patterned activity of an ensemble of neuronal circuits in the motor cortex. Conversely, downstream of the lesion, the innervation of muscle fibers is intact, untouched by the injury. Therefore, in principle, what would be missing is a proper working connection between higher motor centers in the brain and the local spinal cord circuits that supply motoneurons with the right set of instructions. The authors reasoned that, provided that the flow of information is restored between both areas, the injury’s gridlock might be overcome, ensuring that muscles receive the correct commands to move again.

As proof of principle, they set out to test this hypothesis in healthy monkeys. Non-human primates represent a close model that holds promise for neuroprosthetic strategies in humans with gait deficits. They started by recording the activity of a large ensemble of neurons in the motor cortex, in an area where circuit activity represents the leg. What do I mean by “represents the leg”? Our brain contains comprehensive cartography of our body, but this chart is not diffusely spread out. Instead, there are discrete regions where neuronal activity shared by neighbouring cells encodes equally adjacent regions of our body, forming a point-by-point map. If we would electrically stimulate the motor area that stores the right arm’s representation, the right arm would move. This repository of body images projected onto the motor cortex is called a homunculus. Not all areas have the same weight: lips have a larger area than elbows. That’s why we seldom kiss elbows, though these relatively unpopular parts of our body still attract the attention of poets. Christian Morgenstern, a dadaist German poet, composed an anti-war poem around a lonesome knee and its whereabouts (Ein Knie geht einsam durch die Welt, “A knee wanders alone around the world”). 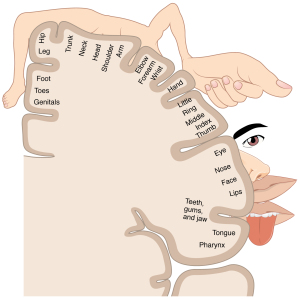 How did they do it?

They implanted a microelectrode array (a chip comprising 96 tiny recording units) in the leg motor cortex and sampled the activity emerging from a group of neurons while the monkey was freely moving. At the same time, they recorded the electrical activity in the leg extensor and flexor muscles during walking. Two cycles characterized locomotion: 1) a swing phase (flexion of the limb and swing forward) and 2) a stance phase during which the leg is in contact with the ground. They observed that each of these phases was associated with a stereotyped pattern of cortical activity, which also corresponded to the electrical signals recorded in flexor and extensor leg muscles mediating the movement of lower limbs.

Scheme of the Brain-machine interface

Once the neural instructions controlling the interplay of limb muscles were decoded, the next step would be to feed this information into an electrical stimulator, which could be locally implanted in the spinal cord. But where to place it? To precisely identify the lumbar segments that are crucial in locomotion, they injected a tracking molecule into the leg muscles. Horseradish peroxidase, the exotic name of this tracer (a protein from horseradish), has an attractive property: once it enters the axons of motoneurons innervating muscle fibers, it travels retrogradely, and it moves all along the axon back to the spinal cord, where it labels the motoneurons’ cell bodies.

By projecting the recordings of muscles” electrical activity onto the spinal cord, based on the position of their respective motoneurons, they could determine a map of motoneuron activation during locomotion. This functional fingerprint of the lumbar segments revealed two hotspots of activation, corresponding to the extension and flexion of leg muscles. Using the activity map, the researchers surgically implanted the stimulator between the lumbar segments of the spinal cord in order to locally excite the motoneurons controlling locomotion. And it worked! When compared to the intact condition, the stimulator fed with cortical motor information was able to elicit a natural pattern of locomotion.

And now comes the juiciest part! Could this system be used to, at least partially, restore locomotion in a lesioned monkey? The researchers created a spinal cord injury that paralyzed one of the hind legs and surgically implanted the spinal cord stimulator. Six days after the injury, the recovery was remarkable. Brain-controlled stimulation evoked a notable gain in locomotion, restoring it to a large extent.

These results open up a promising new avenue for the treatment of disabling spinal cord injuries. This approach requires implantable components whose use has been already approved for applications in similar human research. It is built around a brain-machine interface that relies on entirely wireless communication and real-time signal processing. Together with therapies aiming at promoting axonal regrowth in the CNS, it represents a new hope for patients with motor disabilities.

Brain-machine interface: A hybrid entity built around any connection or direct communication pathway established between any part of the central nervous system (the motor cortex could be an example) and an external device (for instance, a robotic arm). Used in neuroprosthetics to restore sensory-motor and cognitive functions in patients but also in cognitive neuroscience as a mapping tool to study sensory-motor transformations.